L10n, TMS, i18n and more. Do those terms sound familiar to you? If you have already started translating your website or app, you probably already heard at least one of them.

In this blog post, we will decode and explain the most used and popular acronyms and abbreviations in software translation to help you discover and navigate the world of localization.

Acronyms in translation and localization

Acronyms are shorter, abbreviated forms of words, usually created from the initial letters that are used in a given phrase. An example of an acronym is NATO (North Atlantic Treaty Organization) where the first letter of each word created a new abbreviated term.

We use acronyms to make it easier and faster to read certain words and terms. Instead of writing and reading a 4-word organization name, like National Aeronautics and Space Administration, we simply write and pronounce it as NASA. It is the same with localization and translation terminology. Instead of using long, repetitive terms, we used shorter and simpler forms of them, like MT (machine translation) or l10n (localization).

Software localization is a complex process that involves many steps. It also introduces many new terms, which happen to be quite long (e.g., internationalization) and similar to each other. To simplify the process for you, we created a glossary of the most common software localization acronyms.

To make use of acronyms, you need to know what they mean, what words they are shortened from. Without that, xl8 or i18n will be only a strange assemblage of words. Here is a list of acronyms you may come across when translating your software.

l10n in an acronym for localization. The acronym shortens the actual word, by adding the number of characters between the first and last letter. This way, the result is: l-10(ocalizatio)-n.

Localization is a process of adjusting a website or app to user language, culture, and location (region). It consists of adapting an internationalized app for a specific region or language by adding locale-specific components, such as translated messages, time zones, currency symbols, and fonts.

t9n is an acronym for translation. It is created in the same ways a l10n, by shortening the word by adding the number of characters inside.

Translation is a process of transferring words and phrases from one language to another with the best possible representation of the original meaning of the text.

i18n is an acronym for internationalization. The acronym makes a long and complicated word easier to write.

What is internationalization? It is a process of adapting software to different languages, making it international, by considering regional and technical requirements of the target language. i18n is a broad term that refers to the process of designing an application, so it can be localizable to a variety of languages and regions without engineering changes.

xl8 is an abbreviation for translation, and it is used widely as a hashtag in social media. X is for "trans", then we add an l and 8 (ate).

xl8 is also a group of translation management systems.

m17n is an acronym of multilingualization. This term consists of adapting or localizing a website or app into multiple languages. Multilingualization can be done in many ways, including translation, localization, and internationalization.

ICU is an acronym for International Components for Unicode. It is a library of software tools that implement Unicode and ISO 10646 standards. It provides functions for handling text data in different languages, including normalization, case conversion, text segmentation, and transliteration.

TMS is an acronym for Translation Management System. It is a software that helps with the management of translations in one or more languages.

Translation Management Systems are used by companies to manage the process of translating text from one language to another. TMSs are helpful because they allow companies to translate documents, texts, and content in multiple languages at once and make sure that the text is translated accurately and in a timely manner.

MT stands for Machine Translation. MT is the use of computer software to translate text from one language to another. Some examples of MT software are DeepL, Google Translate or Bing Microsoft Translator.

TM is an acronym of Translation Memory. The term refers to a database that stores previously translated words, sentences, paragraphs or segments, for the future use by translators.

CAT is an acronym of Computer-Aided Translation or machine-assisted translation. It is the use of computer software to assist a human translator in the translation process. There are a number of tools and features that the CAT systems offer to help translate various types of texts, like translation memory or built-in use of machine translation.

If you would like to learn more about software translation, visit our complete guide to software localization where we explain how to get started. 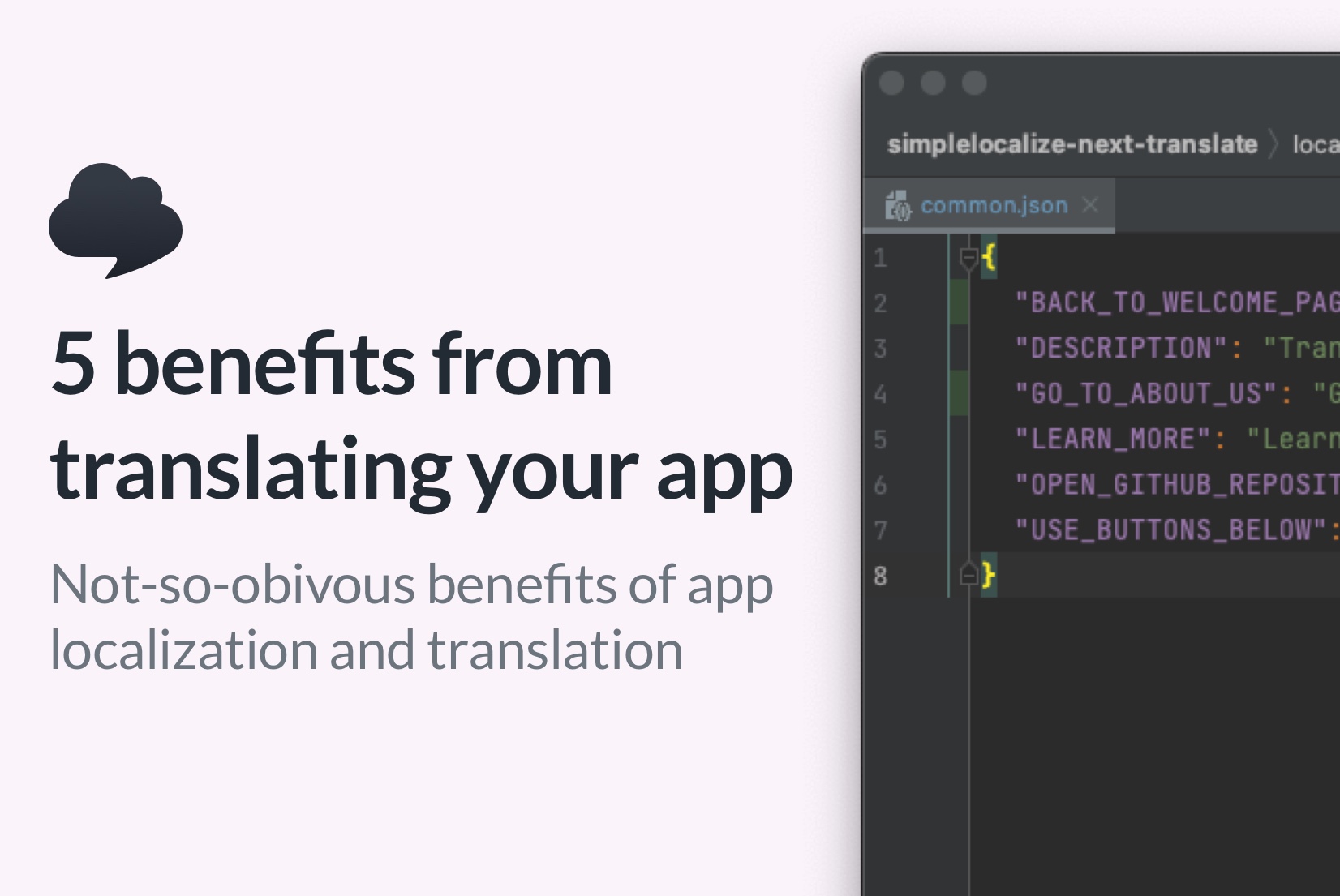 5 not obvious benefits from translating your application

Are you still wondering if it is worth to invest in translating your app? Check 5 not-so-obvious benefits that translation brings to your application. 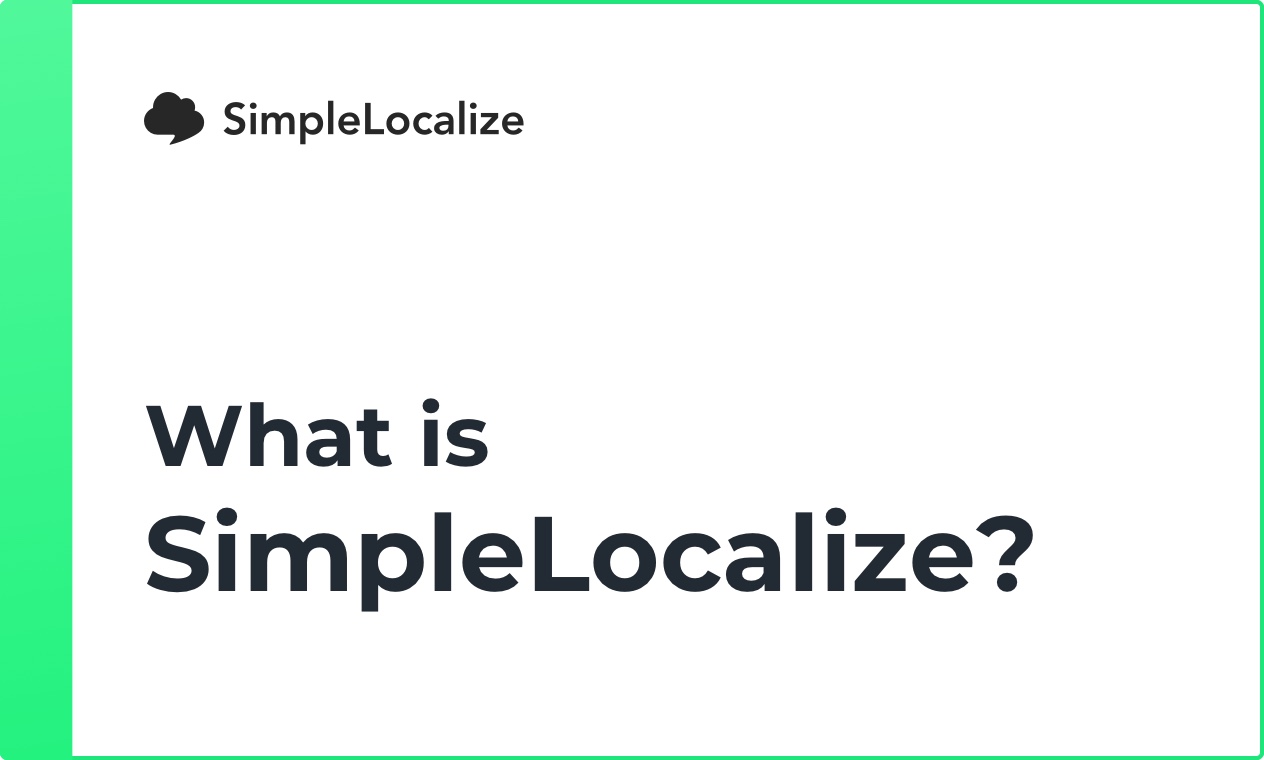 SimpleLocalize is a simple and user-friendly solution for translation management which helps in localization process and translation files management. 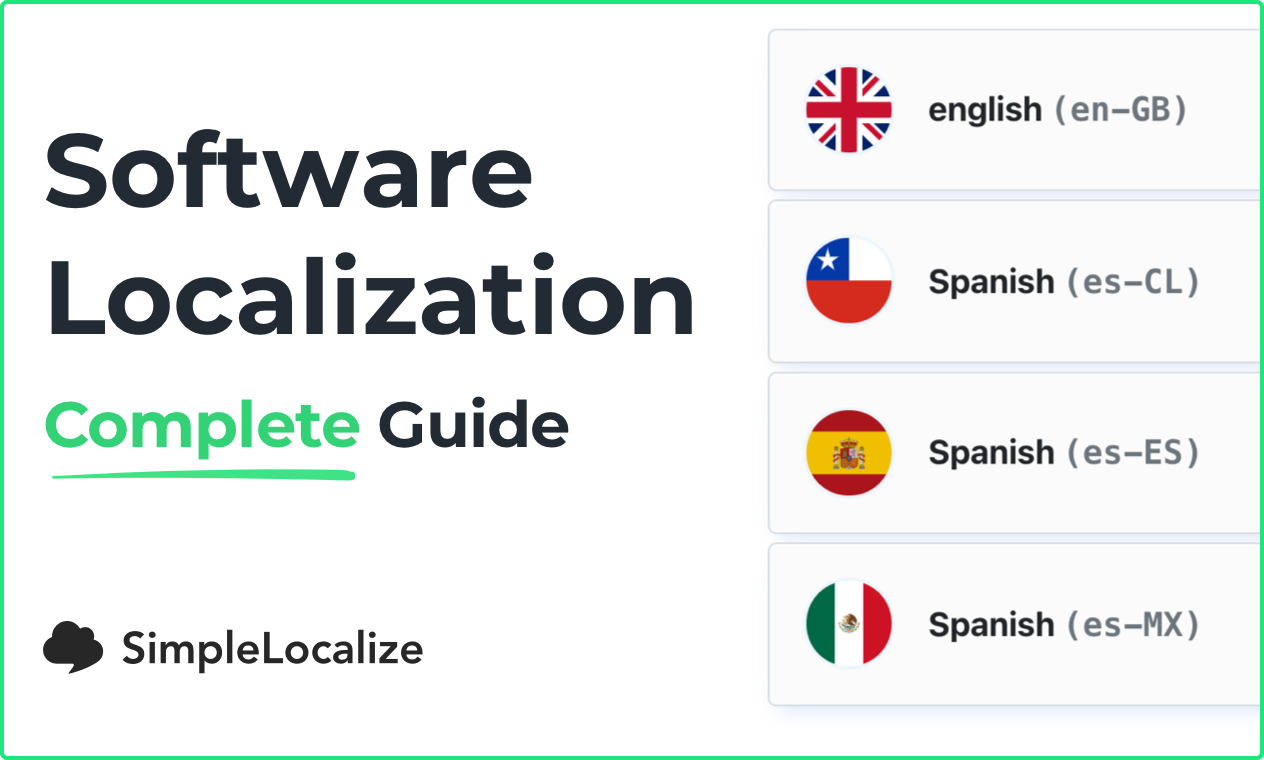 The Complete Guide to Software Localization

Learn what is software localization and how to localize your website or app efficiently with SimpleLocalize translation management help.